This may not be art, but it's an interesting use of concrete. Or perhaps the art is unintentional?

The Enewetak Atoll in the Marshall Islands of the Pacific contains one small island called Runit. Between 1977 and 1980 the U.S. government buried almost 85,000 cubic meters of radioactive debri from earlier nuclear tests. The debri was dumped into a crater on Runit left over from a 1958 blast—mixed with Portland cement—then covered with the concrete dome shown in the photograph. The dome is about 18" thick and 350 feet wide. 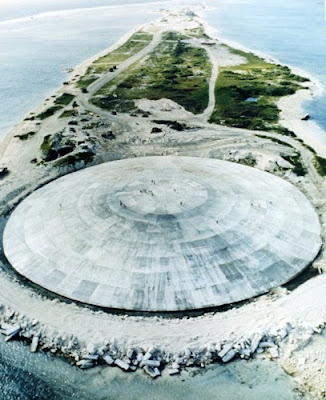 Yes, those are people walking on the dome. More information here:
http://en.wikipedia.org/wiki/Enewetak_Atoll
Posted by Andrew Goss at 7:37 PM No comments: 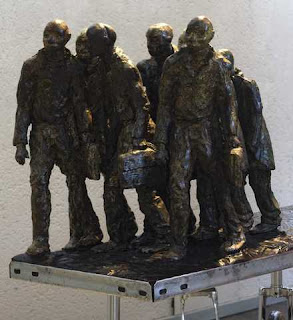 A young Soweto artist has been awarded an honour by having a concrete sculptor piece chosen for his President's residence. Lwandiso Njara, a third year student at Tshwane University of Technology, had just been named a runner-up in the Young Concrete Sculptor Awards. The sculptor portrays nine Metro bus drivers on a journey in aid of a wage increase.

The PPC Young Concrete Sculptor Awards has been running for 18 years and is one of South Africa's most prestigious art competitions. Young artists submit sculptures using concrete. It is open to anyone with or without formal training.
Posted by Andrew Goss at 7:33 AM No comments: