Recent research into cement has produced concretes that actually reduce air pollution by chemically combining with some of those pollutants. These are called photocatalytic cements. On the scale of small sculpture this will not make a difference to the world's air quality, but in Dundee, Scotland, two artists have used the idea in a large outdoor sculpture in their city centre.

The sculpture is in the form of a car draped in a blanket, but the whole concrete form is white. As a conceptual piece, the sculpture is brilliant. It's as if the last car car in the world has been covered to protect it as a museum piece. At the same time it is healing the air, literally, through exposure to light which triggers a photocatalyst in the cement, which in turn decomposes certain toxic substances in the air such as nitrous oxide.

Matthew Dalziel and Louise Scullion are the two artists who designed the sculpture which was commissioned by Dundee City Council. It uses TX Aria cement which was first developed in Italy.

One of the ironies of the sculpture is that cement production itself generates large amounts of CO2, one of our primary greenhouse gases.

Essroc Cement has brought this material (along with TX Arca cement, which is self cleaning) to North America. Concrete Decor has archived an article here:
http://www.concretedecor.net/All_Access/601/CD601-product_profile.cfm
Posted by Andrew Goss at 6:57 AM 3 comments:


I've recently completed a short series of wall-mounted pins (brooches), playing on the idea that things–jewelery objects in particular–really change when the material changes, even if the form is identical. It's interesting to compare the value we place on precious metals compared to more utilitarian materials. The sets of three pins are based on one original pod-like form made from fusing silver sheet and wire. This is a technique where you are working with the silver in it's "slush phase", the red-heat temperature range where the silver is above a solid, but below a liquid. You can fuse pieces of silver together, scrape texture into the surface, break pieces off, melt wire into the surface. After immersing in acid to remove oxides, the surface is burnished, but a lot of the roughness and spontaneity of the process remains. Here's a picture of one of the sets: 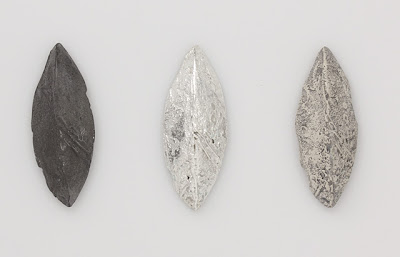 The silver pin is the one in the middle. On the left, I used a black-pigmented cement mixed with stone dust and additives. On the right, I used white Portland cement with stone dust and additives, and after it was set I rubbed in a thin slurry of pigmented cement, which was mostly then rubbed off.
After some research I discovered the ideal molding material. It's a two-part silicone called Knead-a-Mold. (There are other brands as well.) You take equal parts and mix the putty-like substance together with your fingers–it's completely non-toxic and can even be used for food molds–until the colours are blended completely, then push it against and around the object you want to duplicate. I did this with the silver pin, let it set, then cast plaster around that to give the mold support, then took all the components apart. I mixed up the cement and packed it into the empty silicone mold backed by the plaster. I had previously made pin back assemblies which I embedded into the cement before it set.

The concrete pins are dentical in every way to the original silver one, except in the material itself. Every detail of the metal's fused texture is visible. These two-part non-toxic silicones have amazing potential. I mounted the pins onto a matte white acrylic sheet so they could be placed on a wall when not being worn.
Posted by Andrew Goss at 4:43 PM No comments: