An interesting conflict is developing in a community near Liverpool, UK, where a huge concrete sculpture in the shape of a head will be built on a former slag heap. Read an article online here for a description of this all-too-familiar discussion.

Local residents say the project is "bonkers" and that the 2 million pounds could have been better spent helping the 5000 people in the region who are unemployed, or helping local industries through difficult times.

In contrast, this culture website praises the project as "a gateway feature between Liverpool and Manchester." The sculpture "Dream" will stand 66 feet high and is to be constructed of blocks of white concrete. Spanish sculptor Jaume Plesna was commissioned to do the work after a panel of ex-miners chose the design. "We wanted something that was more than just another mining monument. Thanks to this fantastic artist I believe we have a piece of artwork that not only reflects the past heritage of the site but also projects it into the future."

It's interesting to compare the articles in these two web sites: one slams public art as being imposed on the community from outside, the other argues that members of the public have chosen and commissioned the work and were involved at all stages. It's hard to believe they're talking about the same project. Construction is already under way.
Posted by Andrew Goss at 6:09 AM No comments: 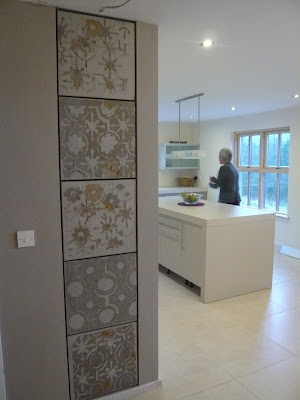 "Girli Concrete is an R&D project (for Tactility Factory) that aims to create innovative ‘soft’ building surfaces. It challenges the perception of textiles as the ‘dressing’ to structure and instead integrates textile technologies into the production of building products. Tactility Factory is a collaboration between Belford (textiles) and Morrow (architecture). Its conceptual challenge is MAINSTREAMING TACTILITY in the Built Environment. "

This is a reduced image of the dragonfly wings I used in the obelisk sculpture shown in the last blog entry. You may have noticed that I've been using images of flight, wings and bird bones, in some of these recent pieces. I like the contrast between the weight of the concrete and the idea of flight. The brass wings were made by photo-transferring this image onto the brass and acid etching the image right through to the other side.
Posted by Andrew Goss at 12:14 PM No comments: