Lens pins. 2009. 3.5 cm (1.5"). Concrete, pigment, gold leaf.
This is an extension of the ideas I was writing about in my previous blog about the concrete cameras. I used the same silicone mold, but only cast small parts of it in the medium of concrete. As I mentioned before, the process of seeing is what interests me, so I have gold-leafed what would be the glass lens in these pieces. I'm still exploring the contrast between precious and non-precious in the jewelry world, so concrete and gold leaf are perfect to express that.
Posted by Andrew Goss at 12:54 PM No comments: 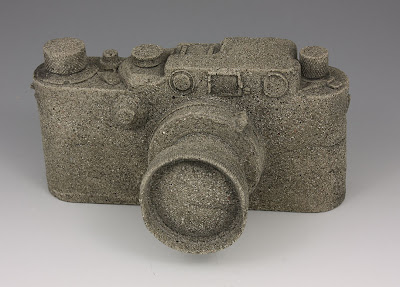 Concrete Camera 1
This is a concept I have been thinking about for some time and am now beginning to resolve, having cast and finished the first two in the series. The concept is that "seeing" is the important part of the creative process; it's perception, not the objects or the media that we use to express our ideas. The central truths of the creative process are in the seeing, or to put it another way, in our points of view.

A concrete camera somehow gets closer to this truth. It has weight and presence. We want to pick it up to see if it works, if we can see through it to capture an image – but we can't. In the first camera (cast from a mold I made of a 1949 Leica, an archetype camera if there ever was one) even the lens is concrete. Nothing is functional, but it reminds us of the process of taking pictures, of seeing, of choosing a subject. My initial idea was to make a lot of these and leave them as artifacts at scenic locations in the countryside, like fossilized records of what we used to record things.

In the second camera I cast a lens in place. (I had earlier applied gold leaf to the back of the lens.) I like the fact that the clarity of the lens connects with the purity of the idea of seeing – and contrasts with the crudeness of the concrete – even though the light goes nowhere, never exposes film, never records anything. 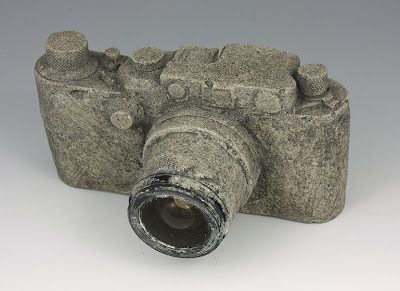 Concrete Camera 2
I'm not sure where the series is going now. A local camera store was able to give me some old lenses that they didn't want, so I have been taking them apart for parts, so I have no shortage of those. I have also been making small concrete pins by casting into parts and corners of the mold.

The concrete mix in these pieces is half sand, half grey Portland cement with the usual additives like stone dust and fibres. The mold is a two-part silicone material that I have written about in other blog postings. The finish is an acrylic colour rubbed into the surface, then a flat clear acrylic spray as a sealer.
Posted by Andrew Goss at 6:15 AM 1 comment: 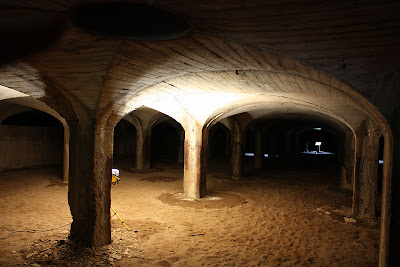 http://www.greysauble.on.ca/ca-inglisfalls3.html
Posted by Andrew Goss at 1:59 PM No comments: